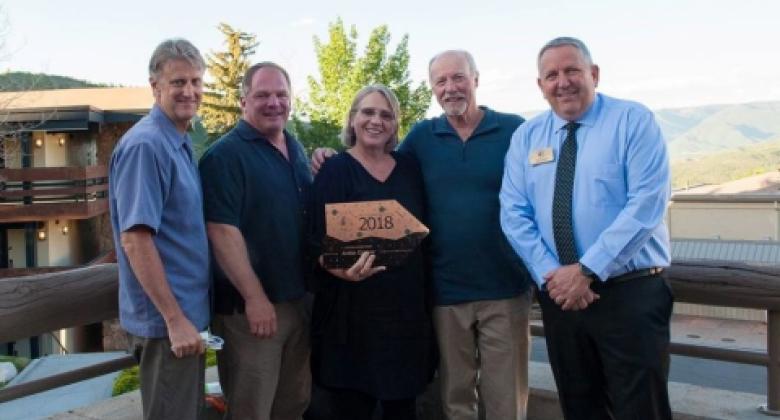 We could not be more proud of our passionate leader!

Anita began her journey in recycling in the mid 1980s. At the time, she was the manager of a 2nd-generation furniture store in Evans, Colorado, but after attending a seminar about the condition of the global environment, she knew she’d found her calling. This passion for recycling turned to action as Anita traded in her car for an old truck with a camper compartment for her kids and literally started following trash trucks around northern Colorado. Through these efforts she started the first residential curbside collection program in the communities of Ault, Pierce and Eaton, later expanding to work with local businesses to help them in their efforts to reduce the amount of material they were sending to the landfill.  Anita introduced the first recycling drop-off program in the City of Greeley by initiating a program at the old Toddy’s grocery store. It was the first time Greeley residents had the option to recycle. Anita was a founding member of the North Front Range Solid Waste Action Group (SWAG), an early version of CAFR that served to educate and promote recycling in Northern Colorado.

Waste-Not Recycling was incorporated in 1989, but it took until 1996 before the company even earned enough to file a tax return. That didn’t deter Anita, as she tirelessly worked to continue to educate businesses, government agencies and public schools about the importance of recycling. One of the first community awareness programs that Anita drove was the CLEAN program (Children Learning-Environmental Action Now). This program (one of the first of it’s kind) won the “Don’t Let It Go to Waste Award” from the State of Colorado in 1995.  Later that year Waste-Not Recycling opened the first dedicated recycling collection center in northern Colorado and the company quickly gained the reputation that it still has today as being the solution for items that others can’t process. Anita’s philosophy that “we shouldn’t be wasting anything as there’s an option for almost everything” became the mantra that drove the company.

Through the early 2000s Waste-Not grew from a small grassroots company into an established commercial recycler specializing in large-scale diversion programs. National companies came on board as Anita helped to train and establish facility “Green Teams” which worked with Waste-Not to increase diversion rates. Anita also pioneered the idea of “Recycling Technicians” who were Waste-Not employees actually working full time on recycling within specific companies. Waste-Not began to hold both commercial and local community electronic waste collection events and helped to arrange the first large-scale e-waste recycling day in Colorado held in Mount Vernon as part of the first Summit for Recycling conference.

Many CAFR regulars today may not realize that the Summit was actually started through the State of Colorado’s OEMC (Office of Energy Management and Conservation) under Governor Roy Romer, and that Anita was one of the original CAFR board members that ensured the conference’s long-term success and transition to CAFR. As a long-time CAFR board member, Anita was highly regarded for her ability to cut through the minutia and deliver clarifying statements that brought sanity to discussions and offered big-picture direction. In 2002 Anita was awarded the prestigious State of Colorado “Environmental Achievement Award”.

As her company grew, Anita became more and more involved in her passion to educate both her customers and the communities she served about recycling. Countless waste evaluations and recommended recycling programs secured large business accounts, but the work Anita did in the school systems may prove to have greater long-term benefits. Anita started the “Recycling Olympics” in local schools as well as poster contests for elementary school students to gain awareness about the environment. Waste-Not would reward the winning schools by planting trees on site, many of which are still standing today. Anita’s work with numerous school children has undoubtedly created an environmental awareness in many of today’s young adults.

In the mid 2000s Waste-Not again led the way in driving a new area of recycling: construction waste. Anita and her team began the task of working with builders and construction companies to identify materials that could be separated on-site and kept out of landfills. Anita taught project managers that they could actually reduce costs and gain efficiencies by placing a little more focus on collection and separation. In 2007 Anita won the prestigious Larimer County Environmental Stewardship award for her work in diversion as construction recycling programs began to become the norm for commercial building sites.

Over the past ten years Waste-Not Recycling has continued to grow and now has more than 75 employees. Anita and her partner Todd Loose have expanded Waste-Not to include manufacturing capabilities, off-setting the volatility of recycling markets that make many recyclables hard to place. Waste-Not can grind, pulverize and pelletize many incoming materials. Quite an evolution from the business model of the one women in a camper following trash trucks! Anita has stayed true to her roots though, and everything that Waste-Not does starts with the intention of first saving the planet. The company’s mission statement is “To create a sustainable environment for present and future generations by providing quality recycling services” and Waste-Not employees live these words in their everyday efforts.     With all she’s done, one might think that Anita may slow down some day – she won’t. Anita is involved in the business of recycling because it’s more than a job; her passion and mindset prove that her very responsibility is to make the world a better and cleaner place. Anita has and will continue to raise the bar on what can be done to move recycling forward.