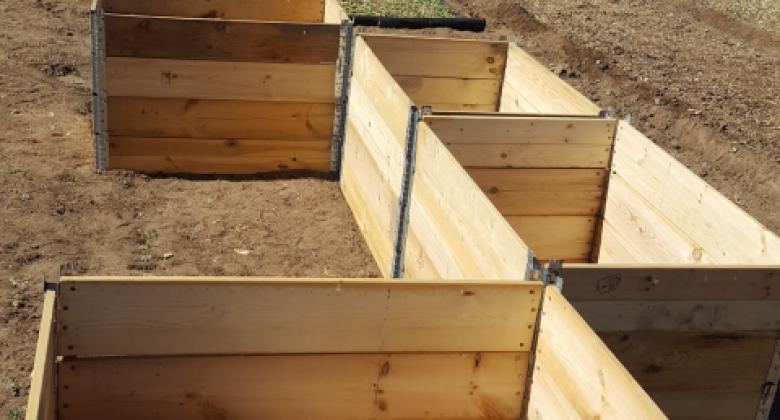 We are very proud to help out a wonderful organization such as Grow a Row! Please check out this article from last year to see how great an organization this is! GROWING a better community!

Jackie Johnson and Lee Hewitt were feeling it on a beautiful evening as they waited for their volunteers.

Both are in their 70s, so sure, their age was a small part of their aches. But the garden was the much bigger culprit.

Calling what the two put together in a couple weeks a "garden" is like calling last week's Metallica concert in Denver a small gathering. They'd spent two weeks digging three long rows in the dirt on the Plumb Farm property on the corner of 35th Avenue and 10th Street.

"We'd go there in the morning and work there all morning," Hewitt said and laughed, "and then we couldn't do anything the rest of the day."

Getting there took a lot more than their hard work. They were amazed at the serendipity of it. But the hard work hurt. The serendipity just made it all worth it.

Hewitt had an idea. She wanted to create a community garden for the Weld Food Bank. The food bank can always use veggies, as lower-income families have a hard time fitting them into their diets, both because of the cost and the inconvenience of obtaining them. She asked Johnson, her friend of more than 40 years and a former Weld County commissioner, for help.

They didn't know where they could put a garden big enough to feed a portion of the food bank. On a whim, they talked to Scott Chartier, curator of historic sites for Greeley Museums, and they were surprised when he offered up the plot directly behind the area known for Baby Animal Days. The spot was perfect.

We are excited to help Grow a Row out this year! This is a great organization and we are proud to help! Check out this wonderful article about the group from last year.

"We wanted it to be close," Johnson said. "We didn't want our volunteers to have to drive far."

They began to joke they should buy a lottery ticket because everything just fell into place. Lowe's donated some seeds and plants, and then Home Depot, and then other nurseries in the area gave them some, as well. When they needed wood chips, the city's forestry department showed up with a truckload.

"Every time we hit an obstacle," Johnson said, "someone was there to jump in."

They asked food bank workers what they needed, and they basically said everything but zucchini (only because it's a garden favorite that grows in abundance). So they planted tomatoes, peppers, onions, beans, snow peas, spinach, lettuce and even a few herbs. They think the food bank will use many of the veggies for the meals the workers prepare for their clients, but the two hope those who use the food bank also can come out to their garden and pick their own vegetables.

They have some big ideas for the garden. They named it Grow-A-Row. Maybe they can add a children's garden, where kids can plant their own veggies, or they can teach them about gardening or composting. Maybe they can build it into a Centennial Village for agriculture.

In the meantime, they have at least a dozen volunteers, and it's their job to maintain a 30-foot portion of the garden. That will give them some ownership, and it shouldn't take them more than an hour a week to maintain it.

The weeds will be the tough part, they said. That won't be fun. But Johnson and Hewitt are happy to leave the aches and pains to their volunteers now.

— Staff writer Dan England is The Tribune's features editor. His column runs Tuesdays. If you have an idea for a column, call (970) 392-4418 or email dengland@greeleytribune.com. Follow him on Twitter @ DanEngland.