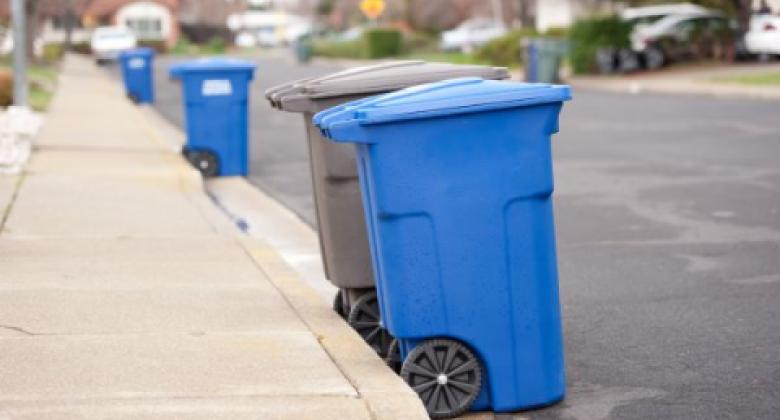 From haulers to recyclers to landfills, the coronavirus changed the way they do business. And some of the changes just might stick.

In the past five weeks, Colorado residents have stocked up on everything from food to toilet paper. They’ve shifted their domestic habits to order takeout in support of local restaurants. They’ve gone online to save their consumer muscles from atrophy.

The stay-at-home restrictions handed down from Gov. Jared Polis in mid-March have certainly scaled back how Coloradans conduct daily life, but they’ve also generated two things in abundance: Residential trash and recycling.

Lou Perez, the interim solid waste director for Larimer County, sees it every day at the landfill near Fort Collins.

“We’re getting a bombardment of the public here,” Perez says. “It’s funny how many folks have been coming here since shelter in place. Our residential customers, the self-haulers who bring in waste from their own home, have almost tripled in volume.”

The closure of many businesses has virtually eliminated some trash pickup, but Colorado consumers have come close to making up for it. With homes occupied for much longer periods than normal during the shutdown, residents accumulate more refuse and recycling in a shorter period of time.

“We are seeing an increase on the residential side, because kids are not in school, parents are working from home,” says Mike Robinson, district manager for Timberline Disposal and Recycling, which serves Summit County and parts of Clear Creek County. “So we’ve seen an increase in volume there, but not to the point where it balances the decrease we’ve seen on the commercial side.”

Scott Jenkins, Waste Management’s area director for collections and operations in Colorado, also has noted a spike in residential volume — in part because people are staying home but also because the nicer weather has encouraged idle homeowners to throw themselves into yard projects — and producing yard waste — that normally might wait until later in the spring.

“People are staying in, eating at home, and more folks are getting into their yards, finding things to do,” Jenkins says. “It’s still a little early in the season. Typically we see it later, in late April and May, but we’re seeing volume in the system earlier.

“Some of the commercial volume is showing up on the residential side. I’d say it’s just shifted, but the volume is relatively the same.”

Jenkins said front line haulers have seen an outpouring of well wishes, from posters taped to trash receptacles to gift cards and thank you notes.

“The public has been very supportive of our employees out there,” he says, noting a recent conference call on customer service reported a variety of gestures in Colorado as well as three other states in his management region. “People appreciate normalcy.”

Recycling has shown a similar shift from business to residential, says Suzanne Jones, executive director of Boulder-based Eco-Cycle, one of the largest nonprofit recyclers in the country. Still, she’s seen a slight drop-off in tonnage — due in part to the temporary closure of CHaRM, the Center for Hard to Recycle Material.

That facility, which accepts items like mattresses, electronics, toilets and scrap metal, shut its doors due to the necessary person-to-person interaction involved with those transactions. Jones says she hopes the center can be reopened at the end of the month, assuming the statewide stay-at-home order is lifted as originally planned.

Eco-Cycle, which has its own fleet of trucks for pickups, also has seen a decline in those requests with so many businesses, especially restaurants, either closed or doing takeout — in which case the food containers end up in residential garbage or recycling.

But aside from the sheer tonnage and its distribution between residential and commercial customers, trash and recycling operations have seen some of the same precautionary measures that virtually everyone has employed — and some new business practices as well

At Timberline Disposal and Recycling, all common surfaces get cleaned with disinfectant wipes multiple times each day — and then get cleaned again by a cleaning crew at night. Drivers must wipe down the inside of their truck cabs, all handles, steering wheels and dashboards — plus wear some type of mask.

Social distancing was trickier. Robinson says his workers were used to having “tailgate meetings” where many workers gathered in a room before heading out on their routes. That practice was discontinued.

“We’re getting information to drivers in groups of three instead of 20,” Robinson adds, “and we’re having some folks work from home.”

The company had another obstacle to overcome — a system of clocking in and out of work using a device that relied on an employee-specific code, plus their fingerprint. Every employee touched the same clock.

Timberline initially just wiped the device down, but eventually abandoned it altogether. Now, there’s an app for that.

“We have an app that folks can use to clock in from their cell phone,” Robinson says. “That call was made because the timeclock was such a focal point for whatever was on people’s hands.”

At Waste Management, employees also huddled for pre-shift meetings to talk about safety or customer service topics. Now, the workers go straight to their trucks. They either receive a handout with the relevant information or communicate via tablets that all the trucks carry.

Workers already are supplied with personal protective equipment, but now the company is doubling down on making sure there are ample supplies of hand sanitizer or any other equipment.

“Whatever they need,” Jenkins says.

And if they need to stay home sick, he adds, that’s exactly what they’re expected to do. Not only does the company take a proactive approach to educating workers on the symptoms of COVID-19, the illness caused by the coronavirus, but it goes a step further to make sure they don’t feel they need to go to work sick to ensure their paycheck.

“We’re guaranteeing all hourly employees 40 hours a week,” Jenkins says. “If you’re out with COVID symptoms, if you test positive for COVID, we’re paying those folks and guaranteeing 40 hours of pay. People know their job is safe, their income is going to be stable.”

The program operates strictly on company funds — no federal subsidy — and covers the worker through the illness and/or quarantine until they’re released by a doctor to return to work. The company also guarantees workers 40 hours pay if, because of the pandemic shutdown, there’s temporarily not enough work to keep them on the job.

Some of the safety measures begin with consumers — which is to say, the producers of all that recyclable material. Eco-Cycle requires that everything be contained within its bin so workers don’t need to touch material that may carry the virus. At the recycling plant, workers already wear PPE such as gloves and, in some cases, masks. Social distancing has been a recent addition.

When the CHaRM facility reopens, more protections will be in place, including a sneeze guard at the window where transactions with customers take place. Normally, workers would help customers unload electronics from their car, but that courtesy may be re-evaluated.

Out at the Larimer County Landfill, some of the increased activity on the recycling front stems from the fact that other area recycling centers have closed. Between that and people also taking this period of extra time at home to clean out their clutter, operations are going full bore, but with added safety precautions.

The landfill’s household hazardous waste operation has moved outdoors into a drive-through arrangement in which customers remove material from their vehicle and place it on carts. Attendants stand at least six feet away with proper PPE to take down pertinent information while maintaining proper separation.

From there the material is carted indoors, where it remains on a shelf for up to 48 hours to make sure any residual virus is dead. Then it’s transported to other handlers who do the actual disposal.

“That’s one methodology we changed to keep the public and workers safe,” Perez says.

Whenever the threat of the coronavirus dissipates, some of the measures implemented to this point throughout the disposal or recycling process may well stay in effect, says Timberline’s Robinson.

“To be honest, some good processes have been put in place, just from an overall self-awareness and protection standpoint,” he says. “Some things we may roll back, but some probably will stick around.”